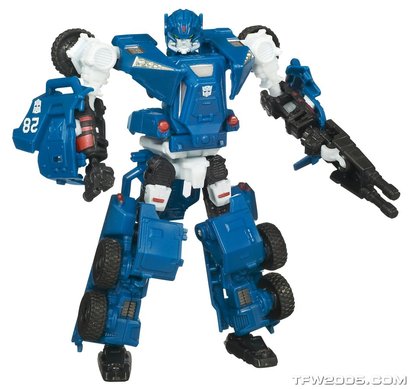 Autobot ATV Breacher is able to dock in the rear loading area of his partner Sea Spray's alt mode.

This mold rules! Everything about this little guy is great. For such a small figure there is a ton of detail. It is by far the best transformer of his size.

The perfect scout size figure. My all time favorite. Excellent alt-mode, great robot-mode, transformation is incredible for its size. Extremely articulated, great color and wonderful face-sculpt and paintjob. A must have, highly recommended.

Breacher is a good, tidy little robot. He's highly posable and has an effective, if small alt mode.

Not much to say about this little guy. Nice complex transformation considering his size. He is meant to go with the voyager Seaspray.

-Deep Dive's little buddy!
-Yeah, yeah. It says "Sea Spray" on the back of his card but Deep Dive's the better pairing.
-Pretty robust looking little bot.
-Decent weapon accessory for a Scout Class fig.
-Poseablity is somewhat limited (especially the arms) but his deco is great!
-The back of this guy is pretty much a mess. Check out the articulating diaper.
-All that time and efforts at have been spent on his head 'cause it looks great!
-It's well known that I love military style alt-modes and this one is no exception.
-Decent amount of paint apps and detailing against his blue hull.
-His turret and weapon also articulate very well making for some good possibilities.
-This guy was designed to interface with Deep Dive / Sea Spray and it's a good fit.
- Fits nice 'n snug on Deep Dive's rear platform!
-These two also scale well together in robot mode. Similar to Skystalker and Mindwipe.
-A "must have" if you already own Deep Dive or Sea Spray, otherwise: PASS

One of the best scout figures to some out of the movie lines, and well worth the purchase. Buy him on sight.

An awesome Scout class figure. He transforms into an Amphibious APC and comes complete with a gun. His transformation is what you would expect from a Scout class piece and both robot and vehicle mode look very nice. I honestly feel that when ROTF came out, Hasbro raised the bar with their Scout class figures and little Breacher here is a perfect example of how updated and awesome these little figures have become in the last 4-5 years. Highly recommended!

An incredible scout with a great transformation. The real winner, with this guy, however, is the sculpt in the robot mode. An incredibly well-sculpted and designed robot mode that has plenty of mounting points for the 3mm clip system, the robot mode alone is worth if for this figure. Great when paired with HftD Seapray.

I found it hard to transform. It wouldn't fully secure at connection points for some reason. I may have just gotten a defective mold.

Great little toy and when paired with sea spray it makes a great display. I gave it a 4 because of the lack of it holding together in vehicle mode. many joints just pop out when transforming so watch for that

This figure is awesome and looks great. I would highly recommend this figure to anyone collecting this line.

An alright little figure, Breacher's only real flaw, IMO, is that he feels like little more than a downsized version of the Universe Ultra Class Onslaught mould. Not a bad thing, as that figure in it's own rights is pretty good, but with such a similar alt mode and robot mode, it's hard to not feel like this guy is a little too much like that.