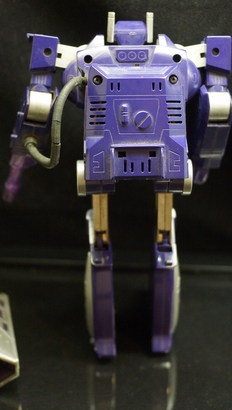 Alongside Devestator, Shockwave is undoubtedly a crown jewel in the Series 2/1985 Decepticon line-up. Shockwave was licensed form Japanese toy company ToyCo, and oddly enough a grey version was also licensed and released by Radio Shack in the same year. A great colour scheme and working electronics will always ensure an easy sale of this popular figure. Watch for his arm hose to be cracked.

These items belong to Shockwave: