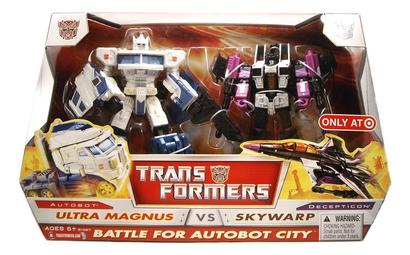 The Autobot City Commander Ultra Magnus (a redeco of voyager Classics Optimus Prime) and Decepticon seeker Skywarp (a redeco of Classics Starscream) were made available in this US only 2 pack. One of the hardest to find releases out of the classics line and always in demand.

I got this set in a lot and they are in rough condition. Skywarp's nosecone is missing. But i know if this set was mint it is a wonderful great.

Got two of these from target on clearance, how lucky was that. Now this set is so wanted by collectors and transformers fans alike. I love the molds of both magnus and skywarp of this set.

Love this set! Two of my favorite CHUG molds! Worth what I payed and a little more. Though Magnus vs Skywarp is kinda odd...

I only have Ultra Magnus from this set. He's a redeco of Classics Voyager Optimus Prime, which is an excellent mold. Probably the best G1-style reimagining of the mold yet that isn't based off of the same cab-over truck. The look and transformation are very good, and he only has a bit of arm kibble that's worth complaining over.

Some may say that the Classics Seeker mold is dated and overused, but that doesn't mean that I don't enjoy this figure! The blue and purple deco with the nice silver paint apps is superb!

Both great figures, but should've been sold as normal deluxes. Only gripe about Ultra Magnus is his blue jeans, but that all goes away with the CIty Commander trailer.

Possible the best 2 figures to be offered together, so far. The color of skywarp is vibrant, and let's face it...who doesn't love ultra magnus. Add on the fact of the Fansproject kit for ultra magnus, and almost every collector yearns for this duo.

I owned both figures and eventually sold Skywarp in favor of the Henkei release. Still, Skywarp has a cool modern deco worth checking out. Ultra Magnus is a fairly bland prime repaint, and the later United release is probably better, but ultimately, the only reason to really own this guy is as a base for the Fansproject City Commander.

If not for the Fansproject City Commander release, this set would likely never have gained it's highly sought-after status. Skywarp is a great addition to the classics collection and is a must-have for anyone's classics seeker trio. However I find Ultra Magnus to be a disappointing representation of the character, just being a repaint of the Classics Optimus Prime. The mold itself is great, but to me it isn't Magnus, it's a white and blue Optimus. I should not have to buy a 3rd party add-on to make the figure look like the character he was meant to be.

I like the classics collection, the transformations are fun and the figures were thoughtfully designed.

this combo pack alone is not really worth it. Skywarp is the best looking classic seeker I love the contrast between the black, purple and metalic accents.

UltraMagnus is a lazy repaint of Classic Prime that only found his "raison d'être" with Fansproject City Commander.

One of the most sought after sets in the Classics line for good reason. Fantastic molds for both characters, good paint schemes in true G1 style and solid packaging conducive to display.